I am an astrophysicist, currently working as a Science Validation Scientist in the Data Management (DM) subsystem at the Project Office of the Large Synoptic Survey Telescope (LSST). In this role, I will be planning and executing acceptance test campaigns to verify that DM products meet the requirements laid out in the LSST DM Science Requirements Document (i.e., did we build what we said we would build?). I will also be working with the science community to conduct validation campaigns by which we will ensure that the DM systems are enabling the science that LSST was designed to accomplish (i.e., did we build the right thing to do the science we want to do?). My research is focused on understanding the formation and evolution of our Milky Way and other nearby galaxies based on their populations of stars. Of particular interest is finding and measuring the properties of satellite dwarf galaxies that accompany most larger galaxies. I also work on measuring the motions and chemical abundances of stars in stellar streams around the Milky Way. Studying these remnants that are left behind when our Galaxy’s gravitational field rips apart the satellite dwarfs helps us to infer the properties of the dwarf galaxies before they were swallowed by the Milky Way. 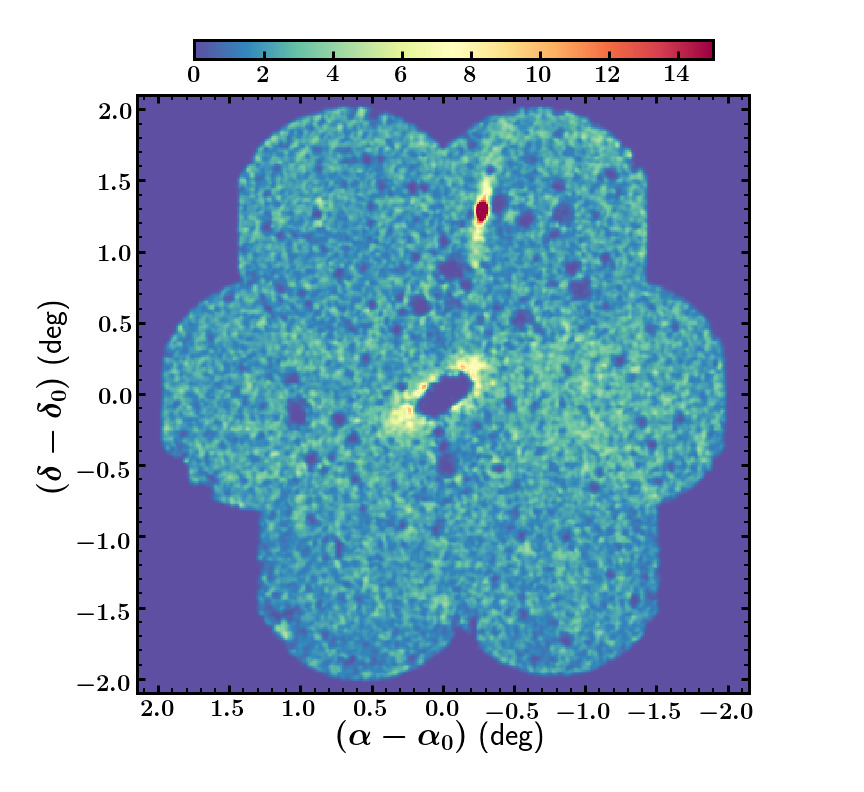 Tidal destruction in a low mass galaxy environment: the discovery of tidal tails around DDO 44

We report the discovery of a $>1$ degree ($\sim$50 kpc) long stellar tidal stream emanating from the dwarf galaxy DDO 44, a likely satellite of Local Volume galaxy NGC 2403 located $\sim$70 kpc in projection from its companion. NGC 2403 is a roughly Large Magellanic Cloud stellar-mass galaxy 3 Mpc away, residing at the outer limits of the M 81 group. We are mapping a large region around NGC 2403 as part of our MADCASH (Magellanic Analogs’ Dwarf Companions and Stellar Halos) survey, reaching point source depths (90% completeness) of (g, i) = (26.5, 26.2). Density maps of old, metal-poor RGB stars reveal tidal streams extending on two sides of DDO 44, with the streams directed toward NGC 2403. We estimate total luminosities of the original DDO 44 system (dwarf and streams combined) to be $M_{i, \rm{tot}} = −13.4$ and $M_{g, \rm{tot}} = −12.6$, with $\sim$25−30% of the luminosity in the streams. Analogs of roughly LMC-mass hosts with massive tidally disrupting satellites are rare in the Illustris simulations, especially at large separations such as that of DDO 44. The few analogs that are present in the models suggest that even low-mass hosts can efficiently quench their massive satellites.
Carlin, Jeffrey L., Garling, Christopher T., Peter, Annika H. G., Crnojević, Denija, Forbes, Duncan A., Hargis, Jonathan R., Mutlu-Pakdil, Burçin, Pucha, Ragadeepika, Romanowsky, Aaron J., Sand, David J., Spekkens, Kristine, Strader, Jay, Willman, Beth
In The Astrophysical Journal, 2019
Preprint 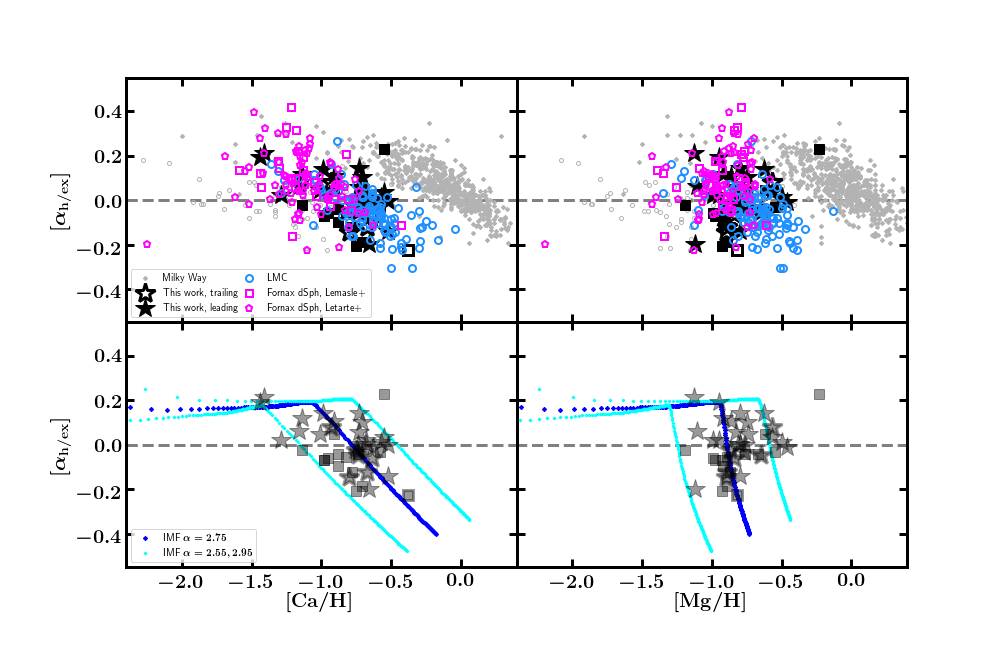 We analyze chemical abundances of stars in the Sagittarius (Sgr) tidal stream using high-resolution Gemini+GRACES spectra of 42 members of the highest surface-brightness portions of both the trailing and leading arms. Targets were chosen using a 2MASS+WISE color-color selection, combined with the Large Sky Area Multi-Object Fibre Spectroscopic Telescope (LAMOST) radial velocities. In this Letter, we analyze [Fe/H] and $\alpha$-elements produced by both hydrostatic (O, Mg) and explosive (Si, Ca, Ti) nucleosynthetic processes. The average [Fe/H] for our Sgr stream stars is lower than that for stars in the Sgr core, and stars in the trailing and leading arms show systematic differences in [Fe/H]. Both hydrostatic and explosive elements are depleted relative to Milky Way (MW) disk and halo stars, with a larger gap between the MW trend and Sgr stars for the hydrostatic elements. Chemical abundances of Sgr stream stars show similar patterns to those measured in the core of the Sgr dSph. We explore the ratio of hydrostatic to explosive $\alpha$-elements $\left [\alpha_{\rm h/ex}\right ]$ (which we refer to as the HEx ratio). Our observed HEx ratio trends for Sgr debris are deficient relative to MW stars. Via simple chemical evolution modeling, we show that these HEx ratio patterns are consistent with a Sgr IMF that lacks the most massive stars. This study provides a link between the chemical properties in the intact Sgr core and the significant portion of the Sgr system’s luminosity that is estimated to currently reside in the streams.
Carlin, Jeffrey L., Sheffield, Allyson A., Cunha, Katia, Smith, Verne V.
In The Astrophysical Journal Letters, 2018
Preprint Source Document Abstract/Article 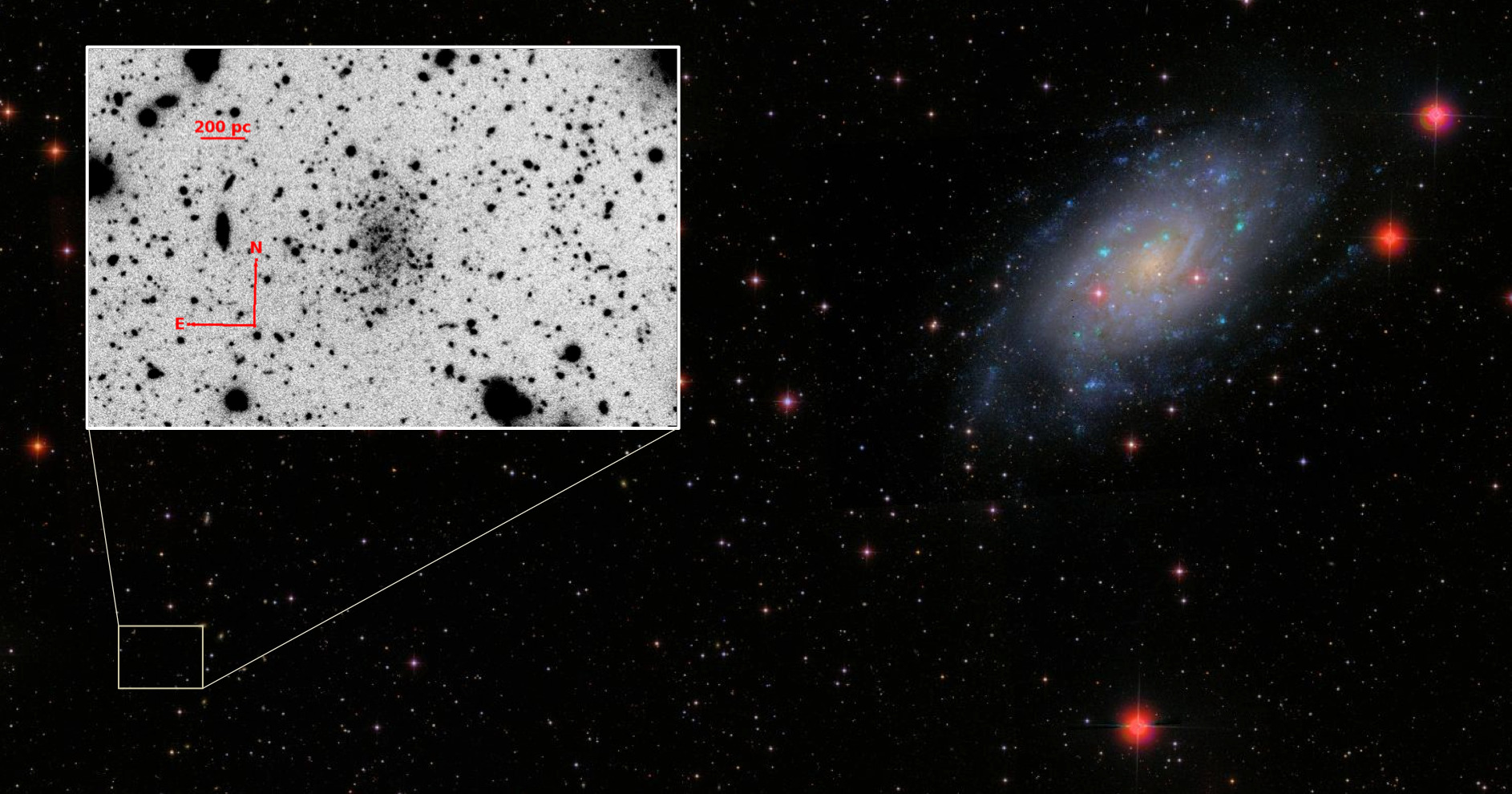 First Results from the MADCASH Survey: A Faint Dwarf Galaxy Companion to the Low-mass Spiral Galaxy NGC 2403 at 3.2 Mpc

We report the discovery of the faintest known dwarf galaxy satellite of a Large Magellanic Cloud (LMC) stellar-mass host beyond the Local Group (LG), based on deep imaging with Subaru/Hyper Suprime-Cam. Magellanic Analog Dwarf Companions And Stellar Halos (MADCASH) J074238+652501-dw lies $\sim$35 kpc in projection from NGC 2403, a dwarf spiral galaxy at D$\approx$3.2 Mpc. This new dwarf has $M_g=-7.4\pm0.4$ and a half-light radius of 168$\pm$70 pc, at the calculated distance of 3.39$\pm$0.41 Mpc. The color-magnitude diagram reveals no evidence of young stellar populations, suggesting that MADCASH J074238+652501-dw is an old, metal-poor dwarf similar to low-luminosity dwarfs in the LG. The lack of either detected HI gas ($M_{\rm HI} / L_{\rm V} < 0.69 M_\odot / L_\odot$, based on Green Bank Telescope observations) or GALEX NUV/FUV flux enhancement is consistent with a lack of young stars. This is the first result from the MADCASH survey, which is conducting a census of the stellar substructure and faint satellites in the halos of Local Volume LMC analogs via resolved stellar populations. Models predict a total of $\sim4-10$ satellites at least as massive as MADCASH J074238+652501-dw around a host with the mass of NGC 2403, with 2-3 within our field of view, slightly more than the one such satellite observed in our footprint.
Carlin, Jeffrey L., Sand, David J., Price, Paul, Willman, Beth, Karunakaran, Ananthan, Spekkens, Kristine, Bell, Eric F., Brodie, Jean P., Crnojević, Denija, Forbes, Duncan A., Hargis, Jonathan, Kirby, Evan, Lupton, Robert, Peter, Annika H. G., Romanowsky, Aaron J., Strader, Jay
In The Astrophysical Journal Letters, 2016
Preprint Source Document Abstract/Article 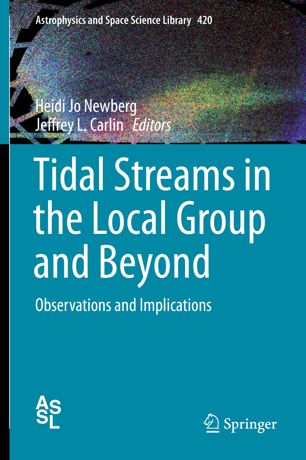 Tidal Streams in the Local Group and Beyond

From the publisher: This volume is written by leading scientists in the field, who review the current state of our knowledge of tidal streams in the Milky Way, the Andromeda galaxy, and in other nearby galaxies. The cosmological origins of dwarf galaxies and the physical processes by which they are tidally disrupted into streams and incorporated into galaxy halos are discussed. The techniques that have been used to identify tidal streams are presented, and will be useful to researchers who would like to find substructures in the next generation of optical sky surveys, including Pan-STARRS and LSST. The methods that are currently under development to constrain both large scale distribution of dark matter in the Milky Way and the (small scale) lumpiness of the dark matter distribution are also explained. The authors also provide motivation for future spectroscopic surveys of Milky Way halo stars, which will aid both in the identification of tidal streams and the constraint of dark matter properties.This volume is aimed at graduate students who are beginning this field of research, but is also a resource for researchers who study tidal streams and related fields. In addition to presenting the physical processes by which tidal streams are created, it also reviews the current state of the observations and the progress towards utilizing these observations to constrain the distribution of dark matter in the Milky Way. The book will introduce anyone with a background in astrophysics to the field of tidal streams.
Newberg, Heidi Jo, Carlin, Jeffrey L.
Astrophysics and Space Science Library, Volume 420, 2016
Volume at Publisher's Site 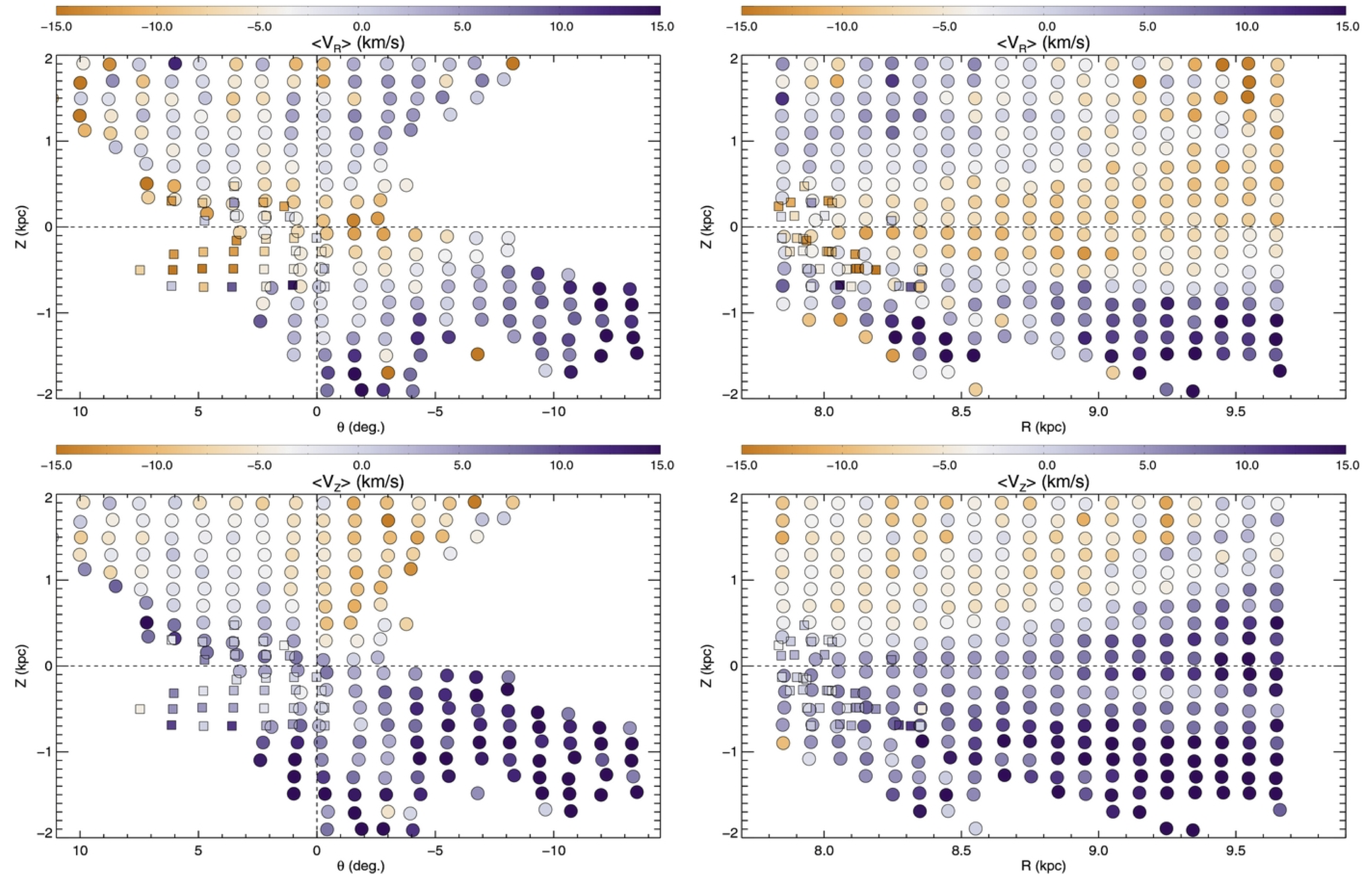 We find that Galactic disk stars near the anticenter exhibit velocity asymmetries in both the Galactocentric radial and vertical components across the midplane as well as azimuthally. These findings are based on Large Sky Area Multi-Object Fiber Spectroscopic Telescope (LAMOST) spectroscopic velocities for a sample of ~400,000 F-type stars, combined with proper motions from the PPMXL catalog for which we have derived corrections to the zero points based in part on spectroscopically discovered galaxies and QSOs from LAMOST. In the region within 2 kpc outside the Sun’s radius and ±2 kpc from the Galactic midplane, we show that stars above the plane exhibit net outward radial motions with downward vertical velocities, while stars below the plane have roughly the opposite behavior. We discuss this in the context of other recent findings, and conclude that we are likely seeing the signature of vertical disturbances to the disk due to an external perturbation.
Carlin, Jeffrey L., DeLaunay, James, Newberg, Heidi Jo, Deng, Licai, Gole, Daniel, Grabowski, Kathleen, Jin, Ge, Liu, Chao, Liu, Xiaowei, Luo, A.-Li, Yuan, Haibo, Zhang, Haotong, Zhao, Gang, Zhao, Yongheng
In The Astrophysical Journal Letters, 2013
Preprint Source Document Abstract/Article

What do we learn by studying the outer Milky Way halo?

In my previous post I discussed our project to find some of the most distant stars in the outskirts of our Milky Way galaxy. (The illustration above shows the fields on the sky that we have observed so far as part of our survey.) In this post, I’ll explain more about why we want to find these distant Milky Way halo stars. Mass of the Milky Way We don’t even know the mass of our Galaxy better than about a factor of two. 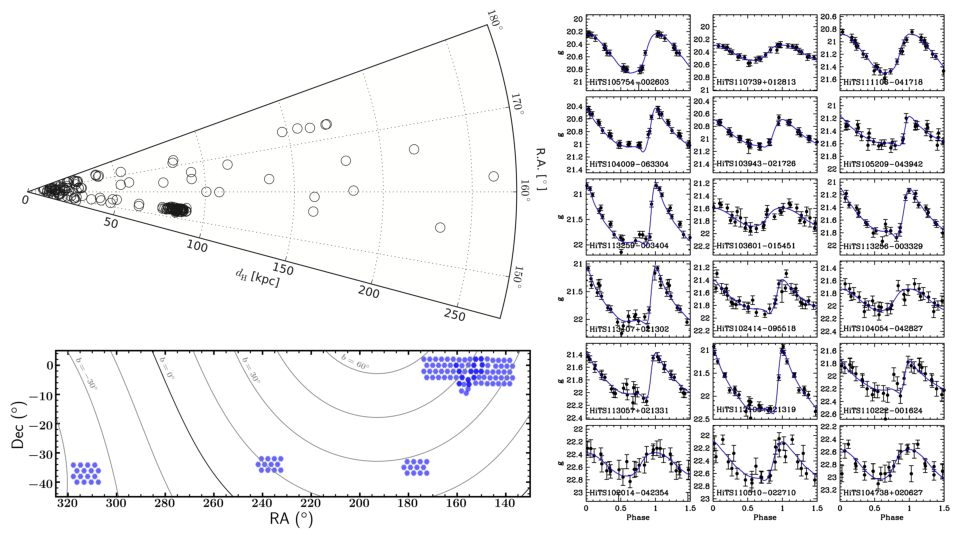 Hi, folks! In this, the first blog post on my site, I’ll explain a bit about one of my research projects that I’m especially excited about lately. I’ll aim to keep it at a level that is understandable for “non-experts,” but inevitably there will be some astro jargon that creeps in… -Jeff The sparsely-populated outermost regions of our Milky Way galaxy are poorly studied. In part, this is because stars of a given type become fainter the more distant they are from us – think about a flashlight: if I stand a few feet away from you, it will look pretty bright (you could read a book by its light), while if I’m a block away, it will just look like a small point of light.